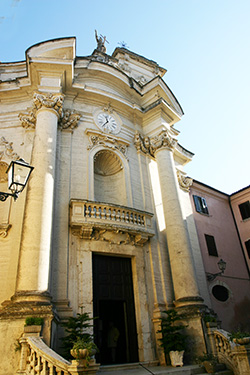 On the site where today the church of St. Maria of Civita rises, there was once a pagan temple dedicated to Mercury Lanarius, the god protector of wool manufacturing, which was the main activity of the Roman centre of Civitas Falconara.

Very important parchment documents such as the Antifonari from the 14th century and a parchment Martyrology gives evidence of the consecration of the church to the Assumption. The manuscript comes from the 13th century and bears in the margin inscriptions narrating historical events and local earthquakes.

The church interior is divided in three naves taking the shape of a Latin cross. In the chapel of the Crowned Virgin there is the wooden statue of our Lady of Assumption, carved in full relief from a Cedar of Libanon trunk.

The rigid posture and the solemn bearing of the Madonna are typical features of the flamboyant art of the year one thousand. Today the statue appears dressed in a rich 18th century mantle and a solemn procession is held in her honour on the 15th August in Arpino. 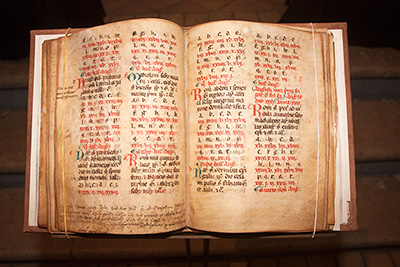 Here too there are two panel paintings by the Cavalier d’Arpino: St John and St Joseph in the vestry and the majestic figure of the Eternal Father  on the dome. An oil painting depicting St Girolamo is attributed to a follower of Caravaggio; from the Roman school of the 18th century are the paintings of St Giacomo ascending in glory (left nave), the Annunciation (left side of the transept), the Dream of St Joseph (right side of the transept). In the central nave ten stained-glass windows stand out.

Heated at high temperature, decorated with historical scenes and symbols and fixed together in lead, they have been designed by professor Luciano Bartoli. Two more stained-glass windows are to be admired in the restaured Baptistry. The artistic front of the organ, inlaid and gilded, is attributed to Stolz, but it is more likely a work of an uknown Latium cabinet-maker lived in the 18th century. Yet the ornate platform holding the image of the Virgin is certainly a work of Stolz.

It was originally embellished by Angels, which unfortunately have been stolen. A memorial stone on the right handside of the entrance hall recalls the visit in this church by Charles III of Bourbon in 1749.