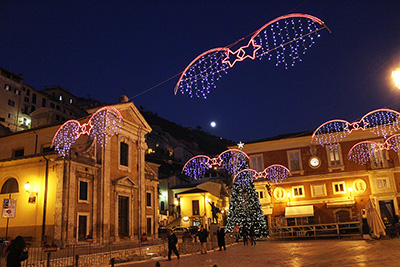 Centre of social, cultural and religious life, Piazza Municipio square stands on the site of the Roman Forum located at the crossroad of the most important roadways of the decumanus, comprising the modern via Giuseppe Cesari and via dell’Aquila Romana, and of the cardo which is the modern via del Liceo.

To notice the different layers of the paving and the perfection of the sewer. Another part of the Roman road can be seen in Aquila Romana street.

The square was initially included within the courtyard of Boncompagni Palace, but during the French rule (1811-1814) it was enlarged and took its final appearance. Coming from via Giuseppe Cesari, there is on the left a bronze of Caius Marius (1958). Soon after stands the collegiate church of St. Michele Arcangelo with its eighteenth century facade (see Churches), whose simple and regular style is interrupted by baroque decorations. On the right, where the square joins via Cesari there is the Liceo Ginnasio-Convitto Nazionale Tulliano, which was established as boarding-school in 1814 and reorganised on the model of the French high schools by Gioacchino Murat, at that time king of Naples. 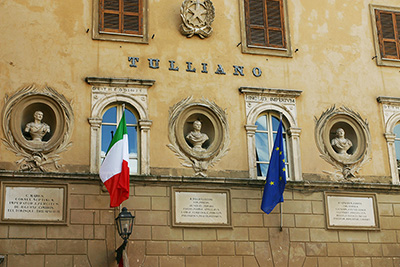 The prestigious tradition of the Tulliano is rivived every year during the Certamen Ciceronianum Arpinas (see Events), which gathers secondary school students from all over the world to test their ability to translate the works of Cicero. The event bears witness to the importance of Arpino and its Liceo as an international centre for the diffusion of classical culture.

On the façade of the Tulliano, inside round niches, the busts of Caius Marius, Marcus Cicero and Marcus Agrippa testify to the illustrious tradition of the school. Each statue is accompanied by a Latin inscription recalling their deeds. Other inscriptions are engraved on the lintels in memory of the Theodinis family, owner of the palace until 1629. 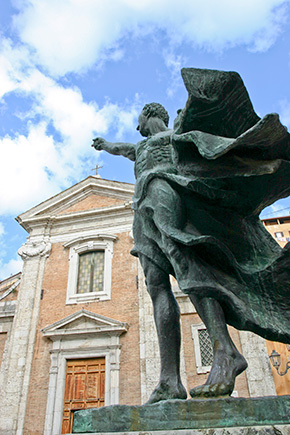 On the side facing via Giuseppe Cesari, a latin inscription with the town coat of arms bears witness to Arpino greatness. Back to Piazza Municipio it is possible to admire a bronze of Cicero (1958), made by the sculptor Ferruccio Vecchi, and Boncompagni Palace building, which close the square at right angle.

The actual appearance of the palace goes back to the early 19th century. The left façade with two rows of windows bears the town coat of arms, underneath which a Latin inscription recalls the deeds of king Charles III of Bourbon in favour of the town. On the sides there are the busts of Vittorio Emanuele II and Giuseppe Garibaldi.

On the right façade there are to be seen the busts of the Cavalier d’Arpino and St. Francesco Saverio Maria Bianchi. Today the building houses temporarily the “Umberto Mastroianni Foundation” (see Museums). Inside the palace, on the left, there is a fragment of a mosaic floor found during the excavations made near the collegiate church of St. Michele.

Going up to the ample staircase that leads to the upper floors, you are inside the showrooms of the Mastroianni Foundation, on the second floor, where there is a fragment of a bas-relief coming from a funerary monument devoted to three women belonging to the Fufidi family. Its members were contemporary of Cicero and collector for the Municipium of Arpino of the revenue from the land of the Cisalpine Gaul, donated by Caius Marius.