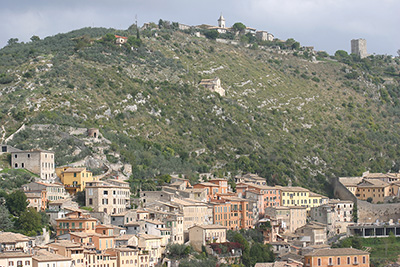 From Piazza Municipio, skirting the Tulliano building and turning down via Giuseppe Cesari, you reach a small square, on the left, named after St. Francesco Saverio Maria Bianchi.

From the balcony on the back of the monument in memory of the Barnabite saint, it is possible to admire a noteworthy landscape of the quarter Civita Facolnara and of the cyclopean walls. Further on the left, a seventeenth century palace was the home of Giuseppe Cesari, called Cavalier d’Arpino (1568-1640). In the early 20th century, the outer wing of the building together with the ancient northern gate which interrupted the circle of the walls was pull down to allow a better access to the town. Yet, it is possible to see the narrow passage, located in the ground floor of the palace, which was once the entrance to Arpino. 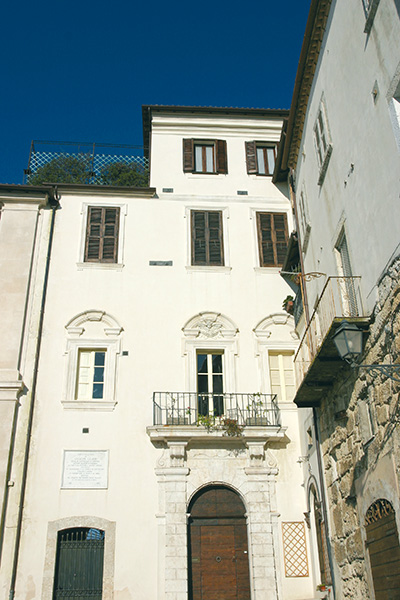 You are in the area called “Fuoriporta”, which is a real gate to the town. From the long tree-lined viale Belvedere, it is possible to enjoy a spectacular landscape of the valley (“vallone”) and of the surrounding hills set against the background of the Lepini and Ernici Mounts.

From the scenic terrace you can make out, half hidden by the green, the remains of a Roman tomb, which popular tradition identifies with the tomb of Saturn, the mytical founder of the town. On the opposite side of the street the iron sculptures made by the great artist Umberto Mastroianni are exhibited . At the top of the avenue, a staircase leads to the entrance to the secluded and charming church of Madonna delle Grazie .

Its airy and classical façade bears an ample pronaos, above which three big windows are to be seen. On the right, a ramp paved with cobble stones leads to via Arco Torrione, through which you arrive at the Qaurter Arco. On the left, there is the large building of the eighteenth century Institute of St. Vincenzo de’Paoli.

Here the built-area still preserve a Medieval character with a labyrinth of alleys and flights of steps, often chiselled in sheer stone,which has grown around ancient routes that linked the town centre with Civitavecchia. 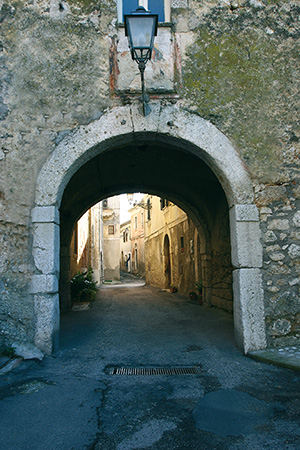 The visit begins from Porta dell’Arco, which once interrupted the circle of the polygonal walls, near an ancient turret. Today both the walls and the other fortifications are enclosed within the built-area.

Go along the narrow via Marco Agrippa from which many lanes branch off. At the end ther is  Salita dell’Arco, where an ample flight of steps links the street with piazza Municipio down below.

On the right the bell tower (nicknamed by the locals the “campanaro”) of St. Michele Arcangelo, raised over sheer rock, has a characteristic Neapolitan pendentive belfry.

On the left, via Greca winds up; it was cited by Cicero as a linking route with the Acropolis; it owes its name to the fact that it was probably built by Greek slaves.

Go back to “the campanaro” and down again to piazza Municipio.