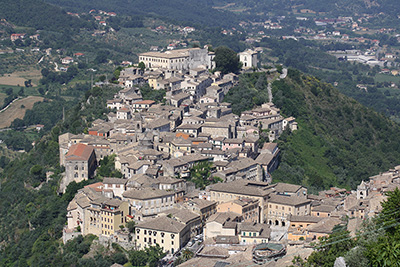 Walking along via del Liceo, which starts from Piazza Municipio, you arrive at Civita Falconara. On the right, on the corner of via del Liceo and via Caio Mario stands the seventeenth century church of St. Croce, under restauration. In front of it, there is the majestic Eagle Fountain (17th century), featuring the town coat of arms with two towers and an eagle.

The quarter  is located on a rock spur which stands sheer above the valley underneath. This strategic position allowed in the past to guard the territory westwards up to the last spurs of the Lepini Mounts.

The Medieval structure with a range of alleys, arches and staircases winding up towards the rock, underwent many changes in the 18th century, during the blooming period of the town. We enter Civita Falconara on the left through via Caio Mario. Recent archaeological findings and documents suggest that even here stood a Volscian settlement, surrounded by its own fortifications of polygonal walls. 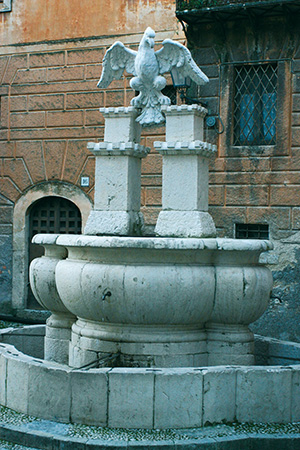 Stretches of polygonal walls are still visible at the beginning of viaa Caio Mario and since the Middle Ages have been enclosed within the inhabited area, as testified to by the tower standing near them. Going on you arrive by the small church of St. Rocco, built over a turret that was part of the ancient defence system.

Soon after, by the ample turn overlooking the precipice (Mezzaluna) you can admire the splendid landscape of the surrounding valleys and hills: on your left the towns of Monte San Giovanni, Boville Ernica and Veroli; on your right the Ernici Mounts followed by the Appennine mountain tops of the Abruzzo National Park divided by the Roveto Valley.

On the background the profile of the Lepini Mounts closes the view towards the Tyrrenean coast. Soon after the Mezzaluna, on the left, you can read another page of the stone book. On the same side there are the remains of the fortifications, over which the church of the Madonna of Loreto (18th century) with an octagonal plant and the monument to St. Francis of Assisi (1972) stand. Finally you arrive at the massive bulk of Ladislaus Castle (13th century). Originally called Castrum Pescli Facolnariae it was renamed after the long stay of  Naples’ king Ladislaus of Anjou-Durazzo in 1409, who had it fortified and established here a permanent garrison. Of the original building only few remains are left.

The main façade of the castle faces over Largo Riccia, another scenic point of the town. Going down one of the alleys on the left, you are in via Ciccodicola, the main roadway of the quarter, in which lanes and ramps join. 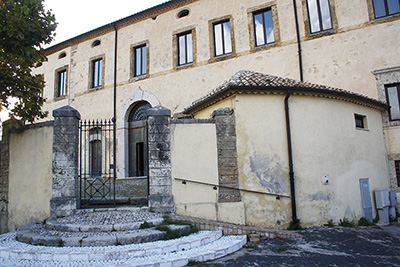 Walking on you reach the square of Civita, the heart of the quarter, paved with the typical cobblestones. The airy façade of the church of St. Mary of Civita, with round and broken lines, niches and late baroque decorations, dates back to the 18th century. On the right, the fine bell tower is visible from any point in the town. Facing the church, the elegant airy façade of Quadrini Palace has the same curvilinear style.

On the left via di Civita is lined up with elegant, high-class buildings. On the left handside of the street there is Battiloro Palace.

The chain in front of its main entrance symbolizes the asylum right granted to the residence of the marquis Battiloro by Charles III during his stay in 1744. At its left via Battiloro leads to Poggio Quadrini and the "Caùto", over which typical courtyards line up. Going on along via di Civita you find the eighteenth century votive chapel called the “Madonnella”. 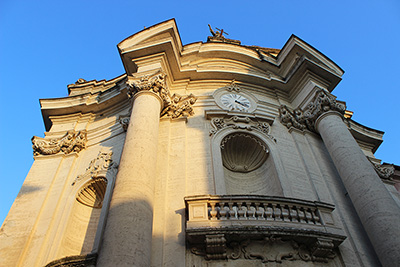 Other eighteenth and nineteenth century buildings face the street: on the left, the rusticated façade of Incagnoli Palace; on the right, the lond round structure of Morriconi Palace, decorated with wrought-iron railings.

In front of it another long and artistic balcony in wrought-iron embellishes and enriches the façade of Pesce Palace.